Thierry Mugler’s Fall/Winter 2011 Collection in Paris on March 2, 2011 has rocked the world of fashion, and Minx co-founders Janice Jordan and Dawn Lynch-Goodwin were thrilled to be part of this momentous event that featured Lady Gaga on the runway.

Driven by Nicola Formichetti, the brilliant new creative director of the Thierry Mugler brand and Lady Gaga’s longtime stylist, the catwalk show made fashion history as backstage video cameras captured every second of preparation and streamed it live to both the physical audience in Paris and to a worldwide internet audience. 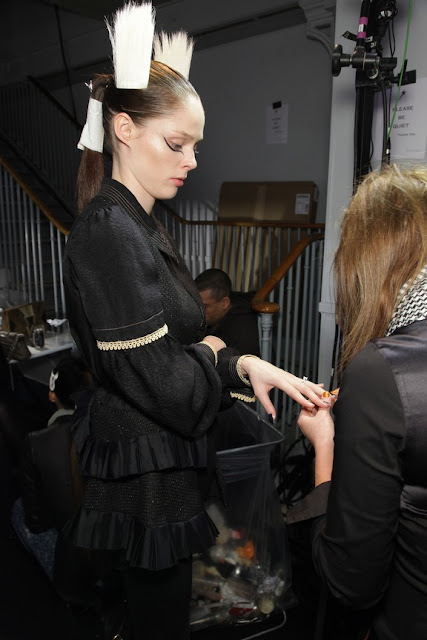 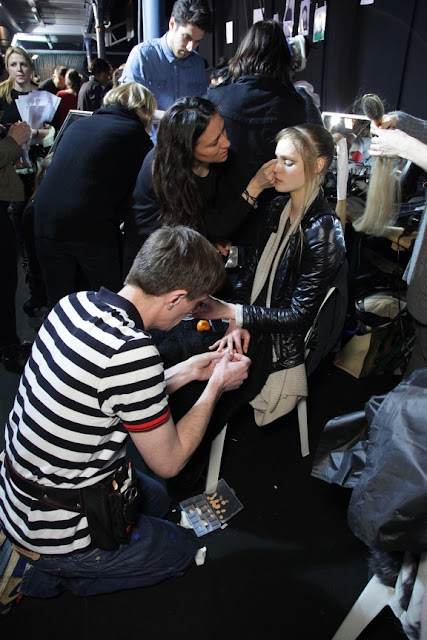 “This was the first time a major brand has revealed the secrets behind the magic of the runway,” said Janice, who was backstage assisting lead nail stylist, the legendary Marian Newman, and her team of Helen Lysle-Taylor, David Barton, Lucy Galsworthy, Kimberley Casey and Mirka Poikkeus.

“Including Lady Gaga really added excitement to the presentation,” added Dawn, who had also been busy adhering Minxed tips to the models for the four hours it required to prepare approximately 35 models for the runway presentation.

Marian was delighted when Nicola, with whom she has worked frequently, asked her to do the show and immediately proposed that they utilize Minx for the nail fashion. “I explained the versatility of Minx, and how Janice and Dawn will personally collaborate with him and me to create anything our imagination can dream up,” explained Marian. “If you want a totally unique concept, then there really is no other choice.”

Nicola explained to Marian that he wanted a nail form that was animalistic and cat-claw like, yet elegant. He requested two or three types of matte noir, matte nuit, matte olive, matte peach, matte Wedgewood blue and electrique blue to match the tonality of the various ensembles specific to each model. Some models used a sheer Minx matte as well. Lady Gaga wore long, pointed stiletto nails with matte black Minx with a “trashed” uneven finish achieved by stretching the Minx over the free edge of the nail and twisting.

“Once Nicola made his final decision about which Minx to use, we then had to apply them to the curved forms which was extremely easy since Minx can be applied to any shape,” explained Marian. The creation of the nails was completed during the show, as was the installation onto the models’ fingertips or, in some cases, onto the tips of their gloves. With every step captured on the live video feed, the nail stylist team was featured as an integral component.

“I’m especially pleased that Nicola agreed to use Minx for this historic show,” said Marian. “Minx Professional has revitalized the world of nail fashion and was the perfect choice to represent the future of nails in the fashion industry.”

For More information on Minx , and where to find a salon go to  http://www.minxnails.com/


If you love Thierry Mugler , and would like to have a piece of him in your wardrobe everyday , why not do it by wearing his fragrances ???? 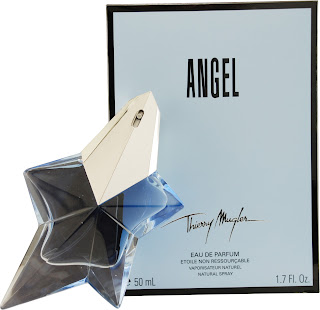 With the classic "Angel" , which has an androgynous scent - ( the Mens and Womens eau de parfum's smell pretty similar) that has been a top contender for over a decade. 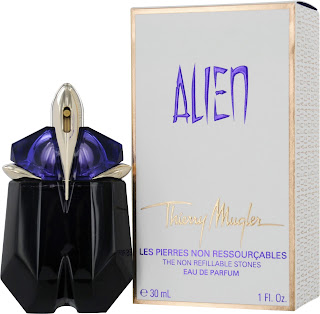 "Alien"  - which is so fitting to the recent collection debuted in Paris just this week,  this scent is alluring and a man-magnet ! 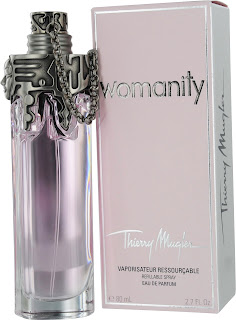 The newest member of the family "Womanity" - which has notes of tobacco , brings a new essence to the signature Thierry Mugler fragrances.  All of these fragrances can be found on http://www.fragrancenet.com/
at 12:30 PM